We are pleased to introduce you to the local Stonemason Rob Maxfield.

Rob has been working as a Stonemason since leaving school in 1988 and he currently resides in Lichfield. He sources his stone from local quarries and uses Red and White Hollington Stone, Portland Limestone and Forest of Dean stone.

His work is scattered throughout the midlands and the South West, and his commissions have come from as far afield as the Scottish borders. Examples of Robs’ craftsmanship can be seen above Shakespeare’s tomb in Stratford, on the famous three spires of Lichfield Cathedral, St Martins Church in Birmingham and in the grounds of Tyntesfield to name but a few.

After completing his formal apprenticeship with ‘Linford Bridgeman’ in Lichfield, Rob took time out from the workshop to successfully study for an HND in Figurative Design and Sculpture at Stafford Art College.

With his wealth of experience and expertise, Rob now hopes to be able to pass on some of the skills he has acquired in what is seen by many as a ‘dying trade’.

Rob has also been approached by the global clothing brand ‘Dickies’ and is their brand ambassador here in the U.K. 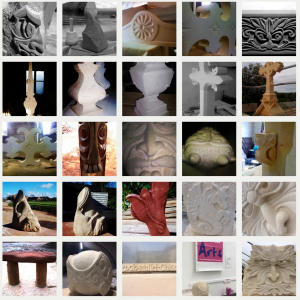